With Harry Potter and the Cursed Child being released on July 31st of last month, I couldn’t really think of any better book to discuss. 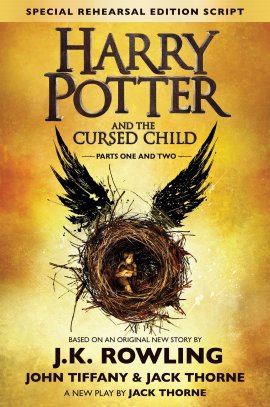 The plot line given is that “Harry is an overworked employee of the Ministry of Magic and married with three school-age children. The play will focus on Harry’s youngest son, Albus, who “must struggle with the weight of a family legacy he never wanted”. The story inside tells the story of Albus Potter struggling to fit in at Hogwarts and his adventures with his friend Scorpius Malfoy. The story in parts also alternates to look at what is going on for Harry and co.

The story is in script format because it was written to be performed as a West End stage play (in London).

As a play it has been very successful with the magic transitioning to stage surprising well. As a script however it has received very mixed reviews over the past couple of weeks. Many seem to find it difficult to read, which surprised me. I found it to be easy flowing and I found any stage directions useful as oppose to intrusive. People also felt Rowling owed them a book and felt mislead in that they thought they were purchasing Rowling’s new novel. Yes, I agree that Rowling’s part in the script writing was possibly overemphasised, but ultimately she did have creative control, so every word had to be approved by her. I also was astounded people didn’t realise it was a script; it says both the word script and play on the cover of the book. Not to mention the hype surround the release was also to do with the West End play.

Speaking of hype, the lack of hype following the release is what really surprised me. The play has continued to receive hype but the script release was very flat. On the day I didn’t see the lines of people waiting for their copy of the script like I have seen in previously and half the Potter fans I know haven’t even bothered to read the script. So that has definitely surprised me.

The play has received its criticisms too, the biggest being that it is a two-part play, so the audience must buy two tickets to see both parts, which I personally think is wrong; when they are creating a play it either needs to be done in one seating or the ticket includes both halves of the play. The other main criticism that I have seen is for the casting of a ‘black Hermione’. I can see where both sides are coming from on this point. On one hand the best actress has been picked for the job, on the other hand all the other characters resemble their film counterparts. Theatre is however a medium where more is left up to the audience’s imagination, so I don’t think it really has much impact at the end of the day whether Hermione is white or black; people can imagine her however they want.

A lot of people have also said that this venture was just to make more money out of the Potter franchise. To that I say good on them. The Potter franchise would be the biggest fictional franchise in the world and if they can keep generating new material and people want to consume it. Let’s just call it a win-win. While I’m sure that is a nice benefit, I don’t believe that is by any means the main motivation behind this, I believe Rowling lives in ‘Potterland’ a good portion of the time and continuing to bring magic to life holds an appeal for many people.

A final thing I found interesting was characterization. Harry reminded me of someone quite self-entitled and willing to abuse his power in this story, which does not match the quiet but temperamental boy with a huge weight on his shoulders from the books. Ron I also felt they made quite pathetic. But the rest of the characters overall matched what I would have expected.

Was it a great story? No. Did I wished they had saved Lily and James? Yes. Do I think the script was a chance for people to make more money out of the Potter franchise? Possibly. Am I glad I read it? Yes.

Motif is a crisp, minimalist and fully responsive business theme. This means your site will look good not only on laptop browsers, but also on devices with smaller screens, such as the iPad and iPhone.
%d bloggers like this: