Everyone seems to being going to London at the moment, so I thought I’d make it my next travel hotspot. London is a fantastic city to visit; there is so much to see and do as well as so much culture and history. 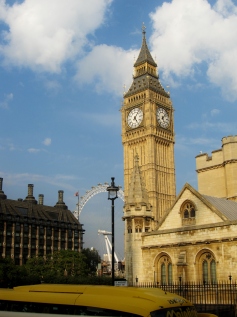 Because there is just so much to do in London, if you’re not driving and even if you are I recommend using a hop on hop off bus such as Big Bus Tours as your taxi around the city.  These buses have bus stops near pretty much every major tourist attraction in the city, and you can hop on and off them all day long. They also include a guided tour.

Because the buses have an open top, you can also see several places from the bus as well as you could by getting off the bus. The bus companies also offer extras such as including a river Thames cruise.

There are certain iconic things such as Buckingham Palace, Big Ben, Parliament Buildings, Westminster Abbey, The Tower Of London, The River Thames, Trafalgar Square, Piccadilly Circus, Oxford Street and The London Eye. New buildings such as The Gherkin are also worth a look. And many of these can be seen driving past on an open top bus or walking. But some are also worth going inside such as The Tower Of London.

Places such as Madame Tussauds, Hamleys and Harrods are also worth a visit.  If you have time, a walk through Hyde Park or Kensington Gardens is also nice.
Before taking a trip to London I recommend researching the many sightseeing places to figure out what you want to see. Then go to London with a plan and make sure you allow plenty of time, I think London would have more things to see and do than any other city I’ve visited.

Motif is a crisp, minimalist and fully responsive business theme. This means your site will look good not only on laptop browsers, but also on devices with smaller screens, such as the iPad and iPhone.
%d bloggers like this: